How Long Does a DNP Program Take?

The pursuit of the highest practice-focused nursing degree, the Doctor of Nursing Practice (DNP), can take you anywhere from 18 months to four years:

Some schools also offer the DNP (both post-BSN and post-MSN) as an accelerated program—a year-round course of study that includes summer semesters that allow students to fast-track their DNP program and finish sooner.

How Long Will the DNP Take If I’ve Already Earned an MSN and APRN Certification?

The MSN-DNP program, most frequently referred to as a post-master’s DNP, consists of 36-42 credits that can be completed in 5-6 semesters. This program is almost always designed for currently practicing APRNs seeking practice improvement or advanced learning in areas like nursing leadership—not another APRN role or population focus.

Accelerated DNP programs allow students to complete their DNP in as little as a year and a half, thanks to integrated summer semesters. Others take two, full years, with no summer courses.

How Long Will the DNP Take If I’ve Already Earned an MSN (or Other Master’s) and I Want to Earn Initial APRN Licensure and Certification? 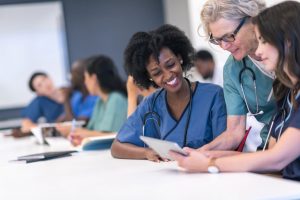 Some MSN-DNP programs are designed for working RNs who have a master’s degree in nursing but do not hold national certification in an APRN role. These programs consist of between 65-80 credits and include all necessary coursework and clinical experiences to qualify for initial licensure and national certification in a chosen APRN role and focus area. Most students can complete these programs in 3-4 years, assuming they take summer courses.

How Long Will the DNP Take If I Want to Add Another Specialization or Patient Population to My Current APRN Certification?

Some MSN-DNP programs are designed for practicing APRNs who want to earn the DNP and add another focus to their APRN role while they’re at it. For example, a nurse practitioner certified in adult-gerontology may choose the DNP to add the psychiatric-mental or pediatric role to their current APRN certification. These programs consist of about 60-65 credits, with most requiring about 3-4 years of full-time study.

How Long Will the DNP Take If I Have a BSN and I Want to Earn Initial APRN Certification?

In recent years, there has been a surge in the number of BSN-DNP programs, so finding one that suits your needs is quite easy to do these days. These pre-licensure programs, which combine the coursework and clinical requirements of both an MSN and DNP, provide a streamlined approach to earning the DNP if you’ve already earned your RN license and have a year or two of registered nursing experience under your belt.

These programs, which can be designed as either 2+2 programs (two years for your MSN and another two for your DNP) or three-year accelerated programs (year-round programs that take you from BSN to DNP in just three calendar years), consist of between 75-85 credits (depending on the specialty track chosen) and include all necessary requirements to qualify for national certification in your chosen APRN role and focus area. They’re usually designed with all coursework requirements upfront, followed by two years of clinical experiences and the completion of a DNP final project.

How Long Will the DNP Take If I Have a BSN and I Want to Earn the DNP Without Initial APRN Certification?

If you’re interested in starting or advancing a career in nurse leadership, you may want to forgo APRN certification when earning your DNP. Fortunately, a number of programs exist that allow you to earn both your MSN and DNP in a non-APRN role. These programs, which consist of 53-63 credits, can be completed in about three calendar years.

Often called ‘executive-track’ programs, these BSN-DNP programs are designed to prepare you for roles like nurse manager and director in a variety of settings and for national certification as a nurse executive through the American Nurses Credentialing Center (ANCC) or the American Organization of Nurse Leaders (AONL).

How Long Will the DNP Take If I’m a Career Changer With a Bachelor’s Degree in a Non-Nursing Major?

If you have your sights set on earning the DNP in an APRN role and specialty, you can use your bachelor’s degree in a non-nursing field to get a head start through a direct-entry DNP program. These full-time, intensive programs consist of 65-80 credits and take about four calendar years to complete. These programs are organized into two, distinct sections:

It may take you longer to earn your DNP through one of these programs if you didn’t complete certain courses in your bachelor’s degree. Prerequisite courses often include human anatomy and physiology, microbiology, and statistics. You’ll need to complete these required courses before starting the program.