What Are the Methods for Sterilizing and Reusing PPE?

With stocks of personal protective equipment (PPE) running low due to heavy use during the COVID-19 pandemic, many facilities are being forced to explore ways to try to sterilize and re-use protective equipment like respirators, gowns, faceshields and goggles that is usually discarded after each use.

The FDA has issued emergency use authorization for several types of filtered respirators that healthcare workers wear when working with infected patients. A number of approaches have been suggested by the CDC for effective rationing:

Next, it has identified three primary ways of sterilizing equipment:

Whatever technique is used, sterilized, reused equipment must meet certain standards, or be discarded:

Items such as gowns and gloves do not have any sterilization procedures that can be easily adopted; goggles and face shields may be amenable to the same techniques as respirators but are not in such short supply and have other alternatives available. The CDC recommends a shift to cloth gowns or coveralls that can be sterilized by washing instead of relying on disposable equipment.

Why Are Providers Having to Reuse PPE Right Now? 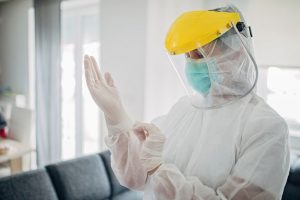 One of the major scandals emerging from handling of the COVID-19 epidemic are the dramatic shortfalls in personal protective equipment available to first responders and healthcare personnel. Although other major epidemics have seen shortages of equipment and resources, they have generally been localized. The answer to those issues has been to ship more in from outside the region.

With COVID-19, the shortage is global—a first in modern healthcare. WHO recommends a 40 percent increase in production to meet demand, calling for some 90 million masks per month, 76 million gloves, and 1.6 million pairs of goggles.

But those efforts have fallen short, which has led many hospitals to attempt something that has been all but unthinkable in the past: sterilizing and re-using PPE.

Because it has rarely been considered, let alone attempted at any sort of scale, sterilizing and reusing PPE is still a minefield of experimental techniques with numerous drawbacks. But it’s still better than running out of equipment entirely.

Personal Protective Equipment Reuse is Authorized on an Emergency Basis

The FDA issued a letter authorizing the emergency use of disposable filtering facepiece respirators (FFRs) and particulate-filtering air purifying respirators (APRs) on March 28, 2020. The letter also includes links to specific definitions for the respirators that are covered under the authorization, which fall into two main groups:

Many formerly NIOSH-approved respirators that have expired shelf-life recommendations are also exempted.

Respirators are the only PPE that are running short, but they are both the most critical, and the most sterilizable. For other types of equipment, other solutions are generally better: 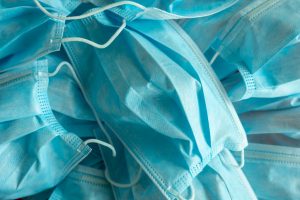 It’s best to view PPE sterilization and reuse on a continuum of efforts aimed at maximizing availability. It starts with procurement and attempting to locate new or unused resources. The FDA approval extends to expired equipment, so some stocks that might otherwise not have been considered could be sitting in storerooms in your facility.

After that, you should preferably take several other steps before resorting to sterilization techniques.

Reducing the overall need for PPE should be your first step. If you can lower the amount required, you can extend how long your current supplies will last.

This can be accomplished through:

Because SARS-CoV-2 has a relatively short half-life on filter media (although the exact time is not known), the CDC has devised a strategy to reduce the need to sterilize respirators directly.

This allows seven days between wearing each respirator, which is thought to be time enough for contamination to be rendered inert. The devices should still be treated as if they are contaminated and precautions should be taken when putting them on, however. As strange as this sounds, it reflects both the dire PPE shortage we are experiencing and the current level of uncertainty surrounding contamination and how SARS-CoV-2 spreads.

If you are still running short, you may have to fall back on sterilization procedures.

The CDC has released guidance for the decontamination and reuse of filtering face piece respirators.

The guidance is not definitive, however. It’s always best to follow manufacturer’s recommendations, if available. 3M, for instance, has issued an updated Technical Bulletin as of April for decontaminating their N95 FFRs. These device-specific recommendations will supersede the CDC guidance.

For everyone, decontamination is very much a work-in-progress. There are no definitive approaches.

There are three objectives that successful decontamination has to achieve:

The CDC does break down the three most promising methods to achieving those objectives given the limited research that has been done on the subject, however.

Although these methods have been tested on respirators most extensively, you may be able to apply them to various other PPE with some effect. Testing is a must and none of the methods should be taken as a recommendation without evaluating them for your specific equipment and circumstances.

Ultraviolet exposure allows decontamination of large numbers of masks simultaneously. An entire room can be set up with masks hung from lines, like laundry. UV lights are set up around the room, either cannibalized from existing biosafety or sterilization cabinets or other UV systems. The walls and ceilings should be covered with a UV-reflective coating to ensure that all angles are hit.

Care has to be taken that both sides of each mask are exposed to the light. UV monitors can be used to assure the proper dose is being delivered. Only about 15 minutes should be required, so this is also the fastest method.

This involves gassing the FFR for approximately 45 minutes with a common, EPA-approved sterilant from specialized generators. Many hospitals already have these units, as the technique is widely used for MRSA decontamination. Care has to be taken to ensure the hydrogen peroxide is dissipated after the decon cycle and before use.

This method has been tested to over 50 cycles with success, at which point the elastic straps began to show degradation.

Putting masks through multiple cycles in a laboratory incubator, set at 65-80C and 50-85 percent relative humidity for 30 minutes, has been found to be even more effective than UV exposure. However, it was also harder on the masks, with partial separation of the foam nosepiece from the mask in some cases.

Using PPE that have gone through the sterilization process requires a slightly different approach than donning or doffing new equipment.

Extra infection control precautions should be taken when using a decontaminated FFR:

Although sterilization is a method to extend supplies of PPE, each piece of sterilized equipment should be evaluated with each use to ensure that it maintains integrity and effectiveness. There’s no point in taking risks with healthcare workers by having them use anything that doesn’t actually offer protection!

The last thing nurses want to think about in the middle of a pandemic are legal issues and possible malpractice suits. But reuse of most single-use personal protective gear falls outside manufacturer’s recommended guidelines, and can potentially expose you to liability despite temporary FDA authorization.

In particular, according to FDA standards, a hospital that reprocesses any single use device is expected to maintain all the quality standards set by the manufacturer and also absolves the manufacturer of any liability for that device.

There are also state-level rules to consider and follow. ASTHO has a document linking to state policy actions on PPE conservation and reuse guidance that you should follow for your location.

The sterilization methods have been surprisingly effective in both decontaminating masks and maintaining their effectiveness. But there are some strict limitations to how and when equipment can be reused.

The CDC warns against using decontaminated respirators for procedures that are likely to result in airborne SARS-CoV-2 particles – namely intubation and extubation, procedures that have become all too common in hard-hit ICUs. That means that reused equipment is generally limited to healthcare workers providing more general care rather than those responsible for invasive procedures.

Despite checking the fit and performance of the gear before each shift, it’s quite possible that staff will be less physically comfortable with sterilized masks. The straps may be harder or rougher, and the gear may retain smells through the decon cycle. These are issues that staff can work through, but when you are in the gear for twelve hours a day, even small problems can really start to wear on you.