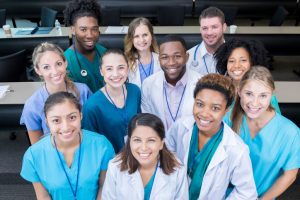 A substantial body of research indicates that DNP-prepared nurses provide a level of care equivalent to that of physicians at a much lower cost.

Stakeholders currently emphasize the need for more nurses with a doctorate—both those with DNPs and PhD/DNPs.

The American Association of Colleges of Nursing (AACN) issued a press release in 2015 describing how its data confirms the surge in enrollment in nursing schools.

In addition to increases in RN, RN-BSN, and master’s program, the data from a fall 2014 survey of nursing programs identified a tremendous increase in the number of students enrolled in DNP programs.

The press release quoted Susan B. Hassmiller, the Senior Adviser for Nursing with the Robert Wood Johnson Foundation She found it “gratifying” to see the expansion in enrollment in DNP programs.

Dr. Hassmiller also said that the expansions in both DNP and PhD programs will go a long way towards meeting the recommendation by the Future of Nursing report that calls for the country to double the number of doctorate-prepared nurses by 2020.